Our Thinking
Growth and Transformation: How Kainos Shapes Business, Employee and Customer Experience 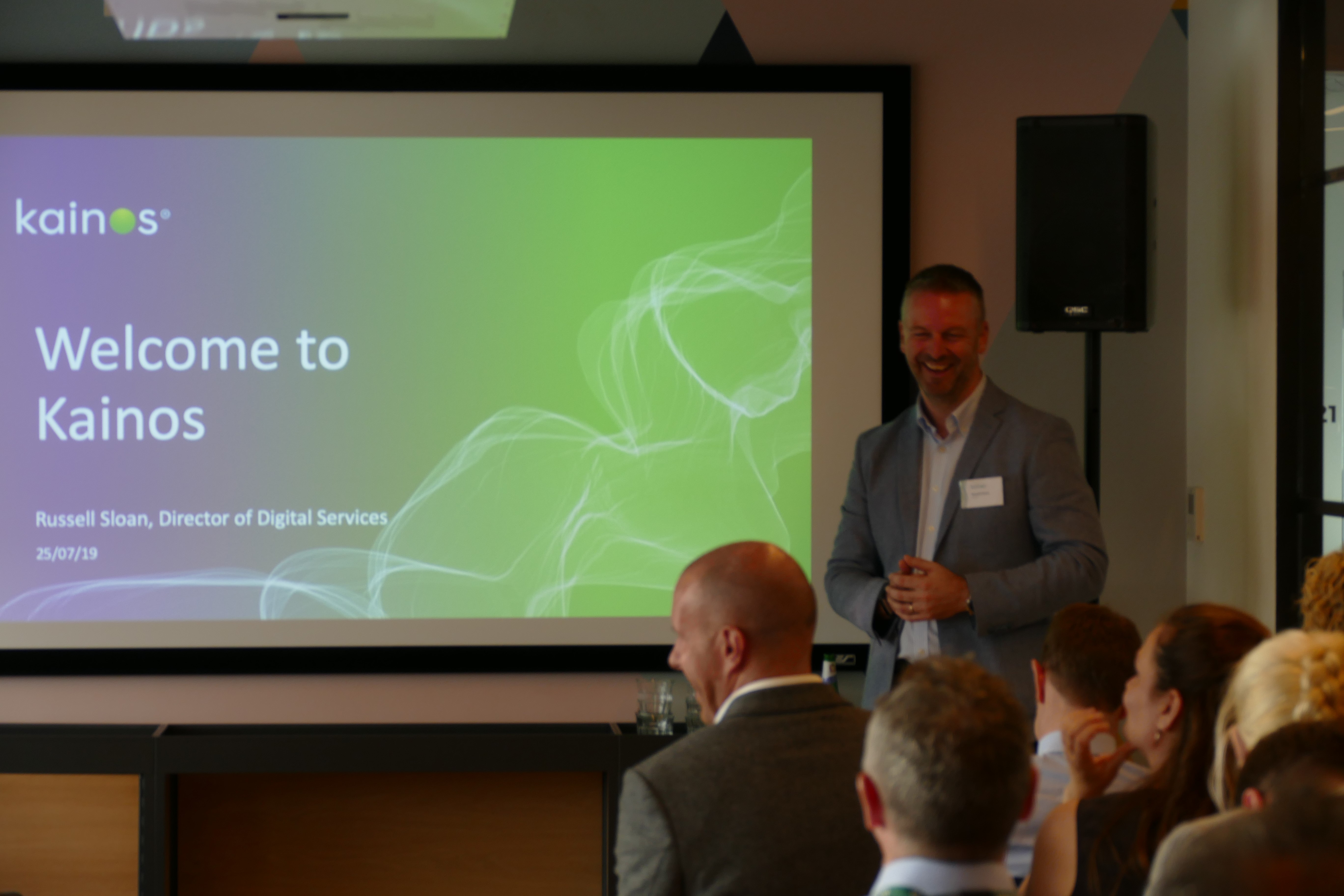 There’s no universal definition for Digital Transformation but at Kainos, it’s about taking a business-critical process and truly transforming it. Others might describe it as updating websites or online brochures but that isn’t genuinely transformative because it doesn’t change the way a business operates. It’s different to IT and software services as well for the way it links change in technology and more general business.

Dealing with diverse business challenges requires us to engage with customers throughout the project life-cycle. With some supplier organisations processes are less transparent and it’s all about the big reveal at the end. This is how design agencies often work and it’s how software development projects have run in the past. But we’ve always worked hand-in-hand with our clients, meaning we’ve been able to adapt quickly to the growing demand for Digital Transformation services.

A good example of the work we do is our recent partnership with the DVSA. We worked with them to upgrade the system that records MOT results, used by some 65,000 mechanics across the UK. They were previously keying data into dumb terminals which sat in the corner of the garage and served no other purpose. The system was run off a mainframe and cost about £35 million annually. It was old technology and difficult to change. To succeed, we ensured we understood what users really needed. We spent time in garages and spoke to mechanics, gradually developing the beta system before going live. The result was the first UK government transactional service in a public cloud. We switched off the mainframe and scaled the new system so all users could log in. It was absolutely a business-critical process. There are thirty-five million MOT tests every year, underpinning car tax which alone is a £6 billion industry. It was an eighteen-month project with a hard deadline and the threat of big financial penalties for the DVSA if they were forced to extend. There was scrutiny up to ministerial level, but the business case was to save £100 million over the next seven to eight years and they’re currently over achieving on that.

Though our healthcare and commercial offerings are performing strongly, the UK public sector has fuelled much of our growth. Our recently announced full year results show a 42% growth in our commercial business and a 68% increase in public sector revenues.

The growth in public sector deals was initially driven by the Government Digital Service which worked to show departments how to do things differently and be disruptive. Now departments and agencies understand the benefits of Digital Transformation and are undertaking projects of their own volition. There’s certainly a need to transform their services. This is driven partly by the demands of UK citizens and taxpayers. People are used to a digital world in which they interact daily with social media, so they expect government to be providing the same digital channels and experiences. But there’s also the need to cut cost; the money-saving business case never goes out of fashion.

Cost and customer benefits are demonstrated by our work with the Passport Office. Citizens can now go through the process of requesting passports online. I renewed mine all on my phone, photograph included. As a citizen, it was a really positive experience and for the Passport Office, the business case for full digital transformation is an annual saving of up to £65 million. At various points, the UK has formed part of the D5, the most digitally advanced nations worldwide. To achieve that, GDS will have looked at other countries. The model is Estonia who had the disguised blessing of having no previous technology infrastructure. They were able to build from scratch, one of the world’s most advanced digital systems without the burden of outdated legacy technology. At Kainos, we’ve similarly looked to other business sectors for inspiration.

Government has been leading the way when it comes to embracing agile ways of working and cloud adoption, but innovative use of data is most prevalent in the financial sector. This is partly because they face less restrictive legislation but there are tangible benefits for any organisation that adapts the way it uses its data.

I joined Kainos almost twenty years ago when the business had about one-hundred and fifty people. Today, the overall organisation has a headcount around 1,450. In terms of revenue and people, the annual growth rate has been just over 20% for the past five years. When I started the Digital Services business in 2012, we had about thirty-five people in total. Now I have a team of around nine-hundred and fifty working on digital transformation across the UK government, healthcare and commercial.

That growth in all parts of the business hasn’t been linear however, and we’ve had to be careful to prevent certain changes negatively affecting the company. For example, Kainos was originally a software engineering business with little in the way of sales and marketing so we had to focus a lot on scaling the sales team. But as they performed increasingly well, we faced new challenges in terms of larger scale delivery. At this stage too, we had to focus on reformulating our people processes to operate effectively with a much larger headcount. In the last year, we’ve gone from recruiting one or two to seven or eight per week which has created new challenges around on-boarding and putting in place the right frameworks that enable people to succeed. Part of our culture has always been to hire graduates and give them exciting career prospects. There are lots of leaders in the organisation who have been with the company for their entire careers. This year, we’ll take in around two-hundred entry-level employees – a mixture of graduates, placement students and from our academies and apprenticeship scheme. In the last year, we’ve have received nearly 22,000 job applications and have conducted an interview every twenty-two minutes on average. We get some very capable and ambitious people from a range of subject backgrounds and we keep the bar high. We hire good people and give them challenging and exciting work to inject fresh energy into the business.

AI and machine learning are becoming pervasive in the technology industry and we’re starting to see tangible benefits from it in enabling Digital Transformation. People worry about the potential increase in unemployment caused by AI disrupting traditional industries, but we see it being used by clients to free up staff from repetitive tasks. Rather than gradually trying to remove people from the business, companies can use AI in a positive way to deploy staff to higher value, more fulfilling tasks. Returning to the example of data and the DVSA, we implemented for them a proof of concept followed by a full solution that used machine learning to analyse their data concerning garage inspections. DVSA have a limited team who inspect about 5% of garages a year for signs of fraud. We were able to look at the data in 50% of the time spent manually analysing data and provide insights as to which garages were potentially acting fraudulently. Whereas they used to find two cases of fraud for every nine garages they’d visit in a day, they now on average find seven. Increasing productivity in this respect was a high priority on the board’s agenda as it impacts people’s lives by ensuring MOTs are carried out properly, improving vehicle safety. With this project we were the winner of the 2018 UK IT Industry Awards Artificial Intelligence and Machine Learning project of the year.

Kainos is one of the success stories resulting from the change in government policy that encouraged departments to engage SMEs. Our competition ranges from companies of fifty people or less, right up to the large system integrators. It’s become more competitive so we must keep differentiating our business case and finding new ways to add value. It’s changed the nature of our work also as we increasingly engage in larger scale projects which sees us compete more and more with the biggest layers.

We have a diverse offering that includes support services with lengthy contracts, some of which have been renewed repeatedly over twenty years. However, the majority of our business is project based and all projects come to an end. Therefore, we work closely with our clients to understand their needs and whether there might be other problems in the business we could help solve. Repeat or recurring business accounts for about 90% of revenue. We remain competitive by focusing on delivery. Lastly, increased competition has made recruiting and retaining top talent more difficult. Our culture and focusing on our people is important. Besides remuneration, we offer genuine opportunities for career development and work that is truly rewarding. We engage people with the chance to take responsibility on large, complex projects that make a real difference to people’s lives.

About Russell Sloan
Russell Sloan is the Director of our Digital Services Division. He joined Kainos in 1999 as an engineer, and leads on our engagements with Government and Private Sector.
View all posts by Russell Sloan